Running is great exercise and we all know it, but it sucks. Then I sucks some more, and sucks a little more and then it REALLY sucks. Then one day it’s tolerable. Then a few days later it has become part of your routine and if you skip a run or miss a few days you are bummed that you are not running. That was my story.

I hated running in school. I thought people who ran cross country were nut jobs. Who would run miles when you could get in a car and drive!? Running sprints and conditioning work were my least favorite part of every sport I ever played. Then as you may know from my previous posts….i got fat. Like really fat. See Below:

So I started running little by little. At first to run a mile was a huge challenge, but soon enough I could run 3 miles and I fell into a habit of not pushing for more. Shortly after I got bored with it and quit. I started gaining some weight back and had to do some soul searching. I realized I wasn’t going to stick with anything running or otherwise unless I was working towards something. Liz needs goals – this is a fact. I ran a 5k, and it was heaven. I actually have a selfie I took while running my first 5k. The fun fact about this selfie is that it was taken with an actual digital camera. As in I was running with an actual digital camera taking pictures of my self. Not something I’m proud of….but definitely something I did. See Below: 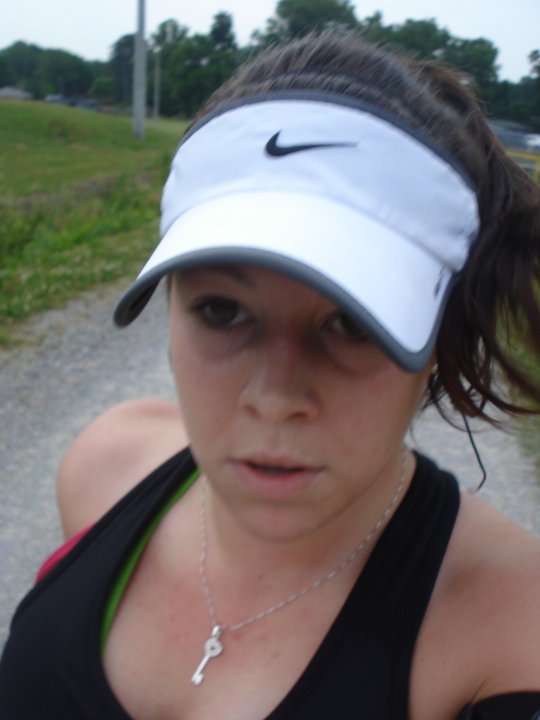 Slowly I started running longer distances and entering longer races. I joined the Chattanooga Triathlon Club (Holler!) and found the most supportive home for perusing a healthier lifestyle I possibly could. More importantly, I found some of my closest friends. It’s amazing the difference being with genuinely amazing people will take your mind off of the terrible thing your legs are doing. So without further ado, Here is my “what running is to me”.

Running to me is so many things. Running is therapy. Running is communion. Running is a challenge. Running is a ugly. Running is beautiful. Running is undefinable.  There are some runs where I process all the anger I have pent up from the stresses of work and life. There are others where I literally cry while I run because there are emotions I don’t know how else to let out. Some times I’m just smiling like a fool the whole time I run because everything seems to be right in my world for just that moment. Sometimes I have particularly grey days where I feel nothing so I force myself to run to make myself feel….something, to make myself cope. Running is a chance for two people with very busy lives to catch up, laugh, and share in life’s highs and lows together. Sometimes you’re running and your stomach is like hey you have a choice to make….poop yourself or poop in the woods. Spoiler alert, I have done both. Sometimes you plan to go out on a 3 mile run and all the sudden you have finished 9 miles. On the flip side sometimes you plan to run 15 miles and all the sudden you only ran 2 and you’re at Dalessandro’s taking a cheesesteak to the face without stopping to breathe. You win some runs, you lose some runs, and sometimes your run will give you the runs….but I digress.

One of my new favorite things to do is pose the question of the blog to as many people as possible with very little direction. So I asked some runners I know to give me a little blurb about what running is to them, and their favorite songs to run to.

“I run with no music, headphone or even my phone, it is my time to be away from everything and enjoy the rhythm of feet and pavement and sights. . . to unplug for a bit.  It is truly mental vacuuming.”
Male – 46

“I HATE running. There I said it. When I was younger, someone told me they felt closer to God while running. I want that, but I don’t have that. For the approximately 40 minutes I “run” my 3.1 miles (yea, I’m slow), all I can think about is not stopping or how much longer I have. I’ve regretted many things in my life, but going for a run is not one them. I don’t feel magically better, I’m not super skinny, and it’s not any easier 2 years later than when I first started, but for those minutes while I’m running, I don’t have room to think about anything other than finishing. The stress of life, the constant reminder of regret, the overwhelming sadness in the world, none of it matters while I run. Those minutes of peace keep me sane, so while I hate every aspect of running (almost), I’ll continue to run”
Female – 29

“When I’m running I don’t worry about anything but running. I’m not thinking about what I should be doing or what I’m doing next. I just think please don’t die, just breath. I guess running is MY time to myself.
I don’t really have a song that I listen to when I run but anything from Yelawolf or Ritz are on the top of the list.”
Female – 31

“Running changed my life. I started running sophomore year in college. I didn’t like it at first, but no one does. I decided that I needed to make a positive change in my life. I was a really big partier and a huge pot head. I was always good with school and got good grades so I never really saw a problem with my college lifestyle. Until I noticed that I was getting depressed, overweight and just generally feeling unhealthy.
I started by running one mile and as time went on I added distance and increased speed. Over the summer of 2010 I was fucking awesome at running and loved it. That fall I completed my first half marathon. I finished it about an 1:45. Which was very unexpected and a huge morale booster. I continued running and in 2011 I completed the same half marathon from previous year (Virginia Beach Rock n Roll half). Finished in 1:32 which is a little under 7 min miles. I felt awesome. Today, I mainly do CrossFit but still love going on runs. Running made me realize that being healthy and active is part of being a happy, productive human.
My favorite song to run to Firestarter by Prodigy”
Male – 27

“Running began as a stress outlet and has evolved into something I can no longer live without. No matter how horrible or unmotivated I feel, going for a run turns my day around every single time”
Female – 27

“Running means finding my inner voice and seeking challenge (since it is my weakest link in triathlon). My favorite song to run to is DJ got us fallin in love”
Female – 49

“Running. I HATE running, but I still try to force myself to do it because I know how important it is to my health. In every sport I played growing up, running was a form of punishment so I was conditioned to hate it and have never really been able to shake that. That being said, when I do run, I find slower rhythmic rap and rock music really help me keep pace and control my breathing. As for a specific song, I usually start with Glycerine by Bush as I build from a slow jog to my running pace.”
Male – 30

“Things I love about running: being in nature, being with my friends, the feeling of accomplishment, and discovering new trails that you’d definitely never find while sitting on the couch. With running there are so many ways to challenge yourself. If i’s beating a time goal, climbing a mountain, finishing a race, or completing a section of trails you have never gotten to experience before. There’s always something new. If i don’t run i just plain feel bad mentally, physically, and emotionally. To put it simply…..life without running sucks! I’ve never regretted going for one, but i have regretted missing one.”
Female – 38

“Running used to be the worst part of exercising for me. When I was in high school I was known for getting sick when I ran long distances. Now I try so hard to convince myself to run each day or a couple times a week, because I know it’s the only consistent way to alleviate my back pain. Now I see running everyday as a necessary healthy habit.”
Female – 26

“Running is great because it can be whatever I want it to be. It can be relaxing, or it can be competitive. I can use it to clear my head, or to give myself uninterrupted thinking time. It’s nostalgic (I’ve been running since I was 8 years old), but it also helps me stay current with what’s happening around town. I don’t run with music. But I always get songs stuck in head. “Shut Up and Dance” by Walk the Moon and “Little Secrets” by Passion Pit both pop up pretty frequently.”
Male – 29

Again, it’s amazing to see how people can have such different views and approaches to the same things. I would jump off a bridge before i could run without music. Yet for some people being alone with their thoughts and nature is a must. For me that is terrifying. Whatever running means to you – keep doing it, and encourage others to. Run with slow people, challenge yourself to run with fast people, push yourself out of your comfort zone and strive to be your best. Or take up cycling and be gentle on your joints. Your call.